– “You know you never defeated us on the battlefield”said the US colonel.
The North Vietnamese pondered this remark for a moment.
– “That may be so” he replied “but it is also irrelevant.”.

Conversation in Hanoi, 1975
Quoted by Col Summers, On strategy

Act I:
The Classical Age of War 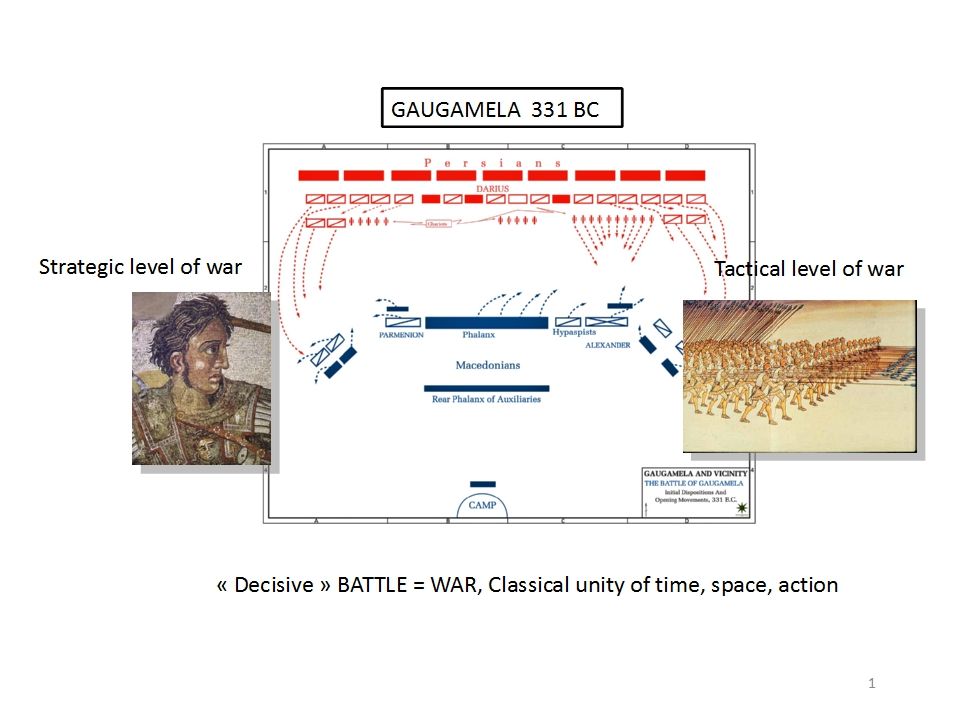 T’he story started in Ancient times, 331 BC, on a battlefield called Arbella/Gaugamela close to the modern-day city of Mossul, in Iraq.

We were in the classical age of war, with a unity of time, space and action. Alexander was both the “Strategos”, and the tactician. At this time there was no room for an intermediate level as the strategos had to be on the battlefield. The operational level may be settled only when the speed of communication ensure strong liaison between Centre of Power and battlefield or operational theatre. Martin Van Creveld explains that the operational art was made possible when the speed of communication made it possible for the commander.

Fast forward to the 18th Century, in the second half of the century the antagonism between Great Britain and the Bourbon Family (France and Spain) led to war.

An interesting war, indeed, as this was the first world war including 4 continents: Europe, America, Asia, and even Africa. In America, the war is known as the French and Indian War.

As far as France is concerned, there were many operations theatres and all of them needed to be coordinated. The war is “joint” and France lost most of the battles in Asia, India, because of the lack of interest in her Navy.

The new idea laid on the notion of « theatres of war ». The war cannot be won through a single « decisive battle ». 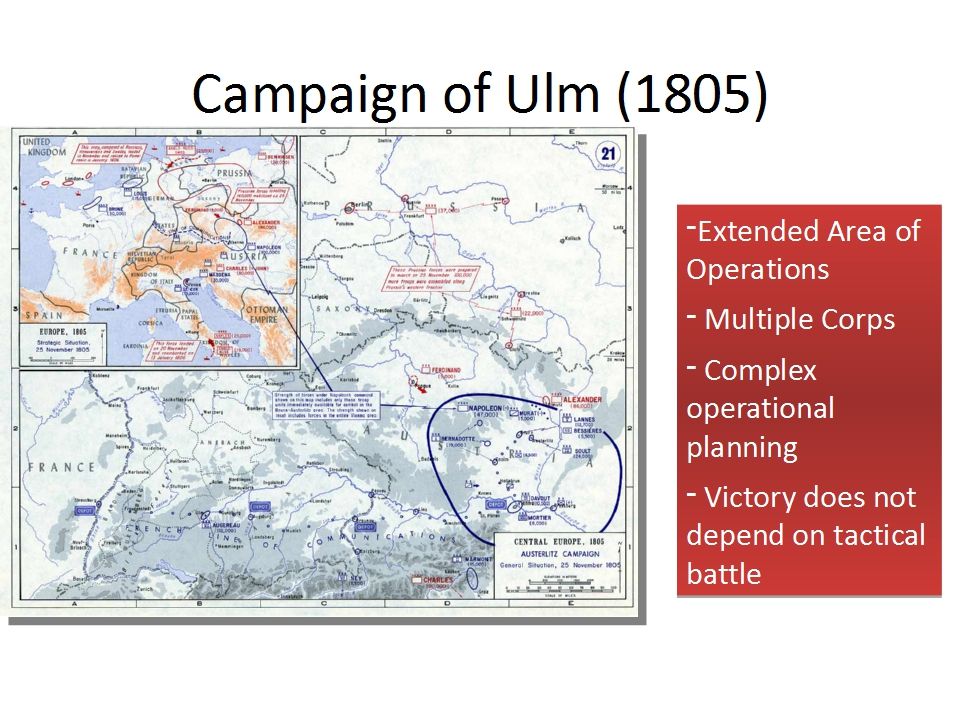 nd 3rd act, half a century later, Napoleon embodied a « revolution in military affairs », started a quarter of century before, by a combination of technical, sociological, political changes.

He was in Boulogne at the end of the summer of 1805, poised to invade England. To defeat the 3rd coalition. The mounting threat of the Russian Austrian coalition forced Napoleon to change his plans completely:

In a famous order to Marechal Berthier, he sent the seven Corps to the East. Perfectly trained in Boulogne, the 200 000 man strong army invaded the heart of Germany through a sweeping march on 7 different directions.

The speed of the corps advances was made possible by improved logistics.

The Coalition was surprised by Napoleon’s speed of advance, and took to much time to react. October 13, Soult 4 corps attacked Austrian troops (general Mack), making 4500 prisoners and losing 16 soldiers. On October 20, Ulm was taken along with Mack’s army.

This battle wad decisive not because the immediate outcomes (the coalition was not defeated yet) but because it set the conditions for the Battle of Austerlitz.

Manoeuvre at the Corps and army levels, logistics, intelligence, Deception where the true keys of victory. Tactics at Austerlitz were brilliant; but defeating the 3rd coalition would not have been possible without the operational move.

Thus, it would be wrong to swiftly conclude that Austerlitz was key of the defeat of the third coalition: Creating the conditions to be in a position to threaten the enemy centre of gravity, being capable to « manoeuvre on interior lines », were the true key effects to be achieved prior to engage in the Austerlitz Battlefield.

The quarter of century of European turmoil between 1792 and 1815 encouraged military thinker to develop the theory of the revolution (based on Jomini theory) illustrated by Napoleon Wars.

Drawing the conclusions from the Napoleon Wars, Clausewitz defined the building blocks of Operational Art.

Later in the century, the progress of technology  led to further development in the operational art :
The civil war in the United States between 1861 and 1865 saw the use of railways as a mean to rapidly shift the operational effort from one theatre of operations to another one. Furthermore, the linkage between military actions, economy activities and perception became paramount.

At the end of the 19th Century and early in the 20th, German and Russians theorized the requirements of operational art in the spirit of industrial warfare, managing large bodies of troops, over long distances, on a long duration, in a complex political environment.

During the Prussian-Austrian war of 1866, the Prussian army was commanded by Marshall von Moltke. However, he was not present at the scene of the decisive battle; he delegated his authority to battle commanders, using telegraph to follow the operations.

Using their experience of the Russian-Japanese conflict of the beginning of the 20th Century (Mukden), then the civil war and the war against Poland, Russian theorists defined the basis of Operational Art.

The idea of adversary forces constituting a system, that might be changed or neutralized through a series of shocks showed up.

The new basis of nascent Operational Art were as follow:
Given the reality of the industrial age, countries and armies have become resilient. A single battle does not decide the fate of the nation.
War to be won must be prosecuted on multiple axes. Using all the capabilities that mechanized force can provide to create shock and disorganization by striking simultaneously in the depth of theatre and combined with other forces.
After Vietnam, the US realized that tactics do not allow to win war even with overwhelming force.

Air-land Battle doctrine was written and operational art became key; the expansion of the battlefield and the capability to strike deep were based on the Soviet theories with the help of technology (precision ammunition, intelligence).

This doctrine was used in 1991 during the first Gulf War.
However, it was not yet understood that the « system of systems » included politics, sociology, Economy, Military, Social and Infrastructure had to be taken into account as a whole.

That they rediscover after 9/11.

We’re in the last phase. Operational art and comprehensive approach have never been so intertwined. 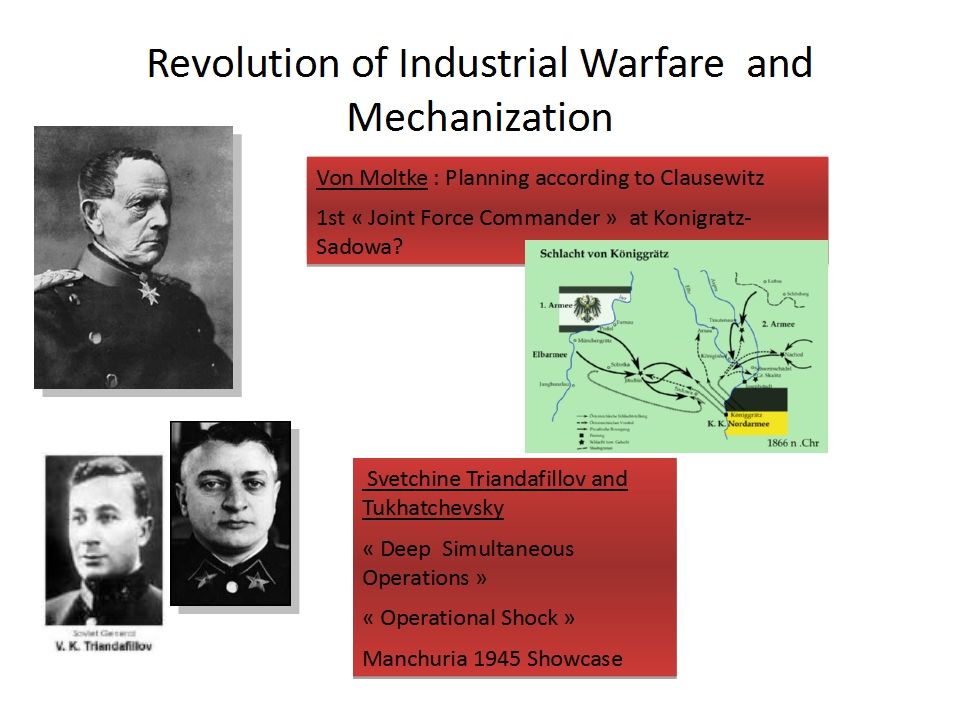 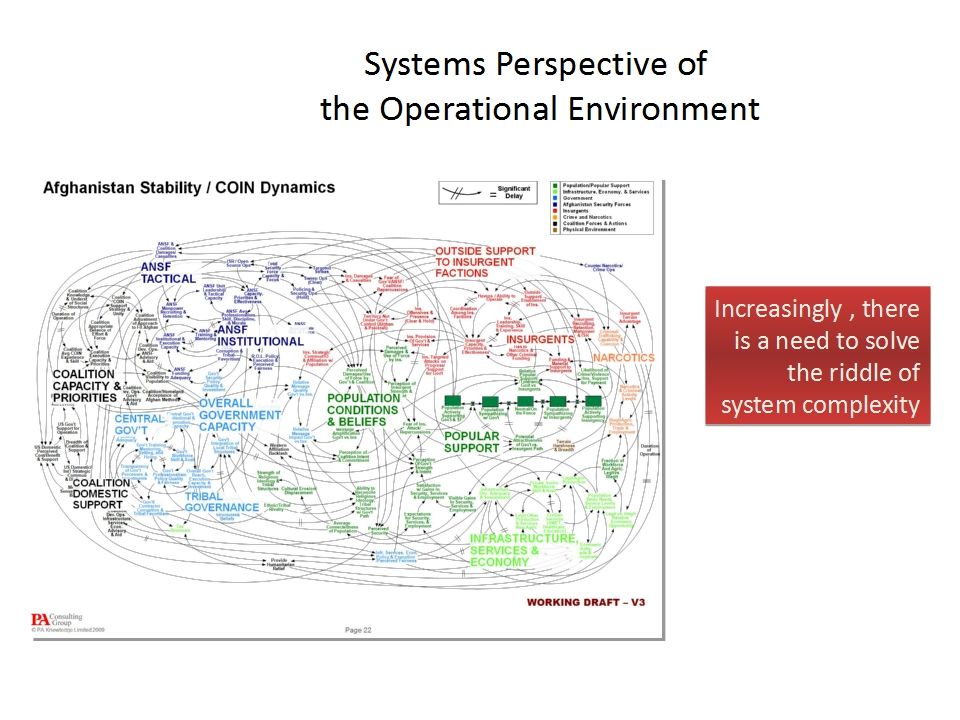 The operational environment encompasses air, land, sea, space, and associated adversary, friendly, and neutral systems (political, military, economic, social, informational, infrastructure, legal, and others).  Understanding this environment has always included a perspective broader than just the adversary’s military forces and other combat capabilities within the traditional battle space.
A system is a functionally related group of elements forming a complex whole. Understanding a system and the interactions with others helps the Joint Force commander of seeing how individual actions on one element of a system can affect other interrelated system components. This perspective helps intelligence analysts identify potential sources from which they can gain indications and warning. It also helps intelligence analysts with COG analysis and planners with operational design by identifying nodes in each system, the links (relationships) between the nodes, critical factors, and potential decisive points. This allows planners to consider a broader set of options to focus limited resources, create desired effects, and achieve objectives.

A systems perspective also supports the concept of achieving unified action in any operation by providing the JFC and staff with a common frame of reference for planning with agencies that represent other instruments of national power.  This systems view facilitates the JFC’s collaboration with counterparts from other agencies and organizations to determine and coordinate necessary actions that are beyond the JFC’s command authority.

The operative and strategic teaching

We are at your disposal and will respond to your requests as soon as possible.